Adventures of an Apprentice Angler - Or - Can Anybody Here Eat Any More Fish, Please?

Like most cruisers, the majority of our "cruising" is done in the dinghy with our yacht, Anju, safely anchored in a cosy spot. For the ship's fisherman, I could tell this was becoming increasingly frustrating, as the only fishing equipment we had on board was trailing lines, for use when the yacht is underway.

After a couple of weeks anchored at TTSA in Trinidad, the fisherman was becoming increasingly twitchy, watching the fish frolicking around our boat each day. One day, as he returned from running some errands, I noticed a strange glint in his eye as he told me a new store had just opened, which I absolutely must see. Baffled by his enthusiasm for shopping, I raced along behind him on my bike to Tropical Marine, where I was introduced to Albert Battoo, proprietor of the brand new "Offshore Fishing Supplies" Shop. Not the kind of retail therapy I'd had in mind!

Albert was a mine of information about fishing the local waters and in just a flash of an exhausted credit card, the ship's fisherman was equipped with a new spinning rod and a selection of lures, all expertly rigged for him by Albert. "Let's go and catch some free lunch!" said Phil excitedly. If I'd only known that this was the beginning of an obsession!

Being a keen fly-fisherman in his youth in Wales, the Captain decided to start by trying a spot of spinning from the big boat, to break in his brand new rod. After only a short time practising his spinning technique, using the selection of lures (the type resembling fake fish), he proudly landed his first catch, a respectably sized Spanish Mackerel, known locally as Carite.

Now an expert, it was time to give lessons to the reluctant apprentice. Well I practised and I practised my spinning technique and eventually managed to catch a stanchion, closely followed by our brand new sun-awning. At this point the expert decided that maybe I should be trained to fish on the bottom for Snapper instead!

First I tried the feathery-squid-type lure that had been suggested. I wasn't convinced that even the most stupid fish would be fooled into trying to eat a pink and white nylon squid with a freakily large eye. I must have psyched them out and after at least ten minutes of impatient jiggling of my line, I decided it wasn't going to work. "Well," he said, "we'll try cutting up the fish I caught to bait the hook, using a weighted line to keep it on the bottom". Am I missing the point? "Couldn't we just eat the fish you caught instead?" I asked. No response, just a hard stare.

My third attempt finally brought success and provided us with a lunch of red snapper. At this rate it would be a long time before we reached the break-even point of the lunch being free though!

My next lesson was to be in the technique of trolling from the dinghy. The nutrient rich waters around TTSA are literally teeming with fish and using the mysterious "fishing timetable" supplied by Albert, which advised the best times for fishing and seemed to be based loosely on the tide table, we never failed to land a catch on our daily fishing trips. We were quickly overwhelmed by our catches of Southern Sennet, Crevalle Jack and Spanish Mackerel; some even chose my line on which to commit suicide! Having only a tiny fridge on board, we were catching more than we could eat and began sharing our catch around the other boats in the anchorage and the TTSA staff. Things were looking up! 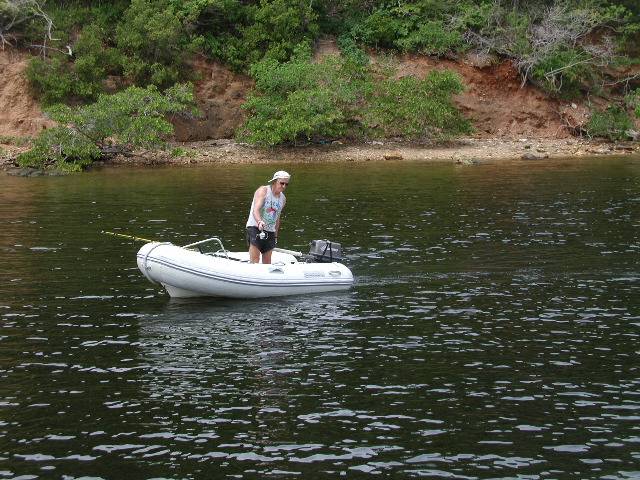 Expert demonstration in trolling -  what is he wearing?

You may get me fishing but not if I have to dress like that!

I had now reached a level of expertise where I didn't feel the need to scream each time a poor unfortunate victim thrashed around on the end of my line. We decided to venture further afield to put our skills to the test. We took our dinghy outside the confines of the bay in search of bigger fish. As we fished along the rocky headland, Phil got a bite, the dinghy stopped suddenly, the line began to whirr on the reel and then tragedy struck. The cunning fish, which must have been a whopper, stole his favourite lure. I'm sure I even saw a tear in his eye. If I'd only realised I was supposed to be emotionally attached to my lures, I'm sure I'd have been doing much better!

My chance came soon enough. Yet another birthday arrived and beaming my husband came aboard telling me he'd got me a present. I should have guessed; not a pretty pair of earrings but a pretty fishing lure. "Oh well," I thought, "If you can't beat them, join them". So we set off on my birthday-treat-fishing trip. This time I made sure I had developed an emotional attachment to my new lure before we headed out. "I've named him Mr Green", I said proudly. Again no response, just a strange look from the Captain.

Confident that this technique would work, I enquired what he'd like me to catch. "Crevalle would be nice". Perhaps it was birthday luck, but I hadn't even finished putting out the line when I hooked my first Crevalle. Out went Mr Green again, bang, bang, bang, three more Crevalle. I was really on a roll! 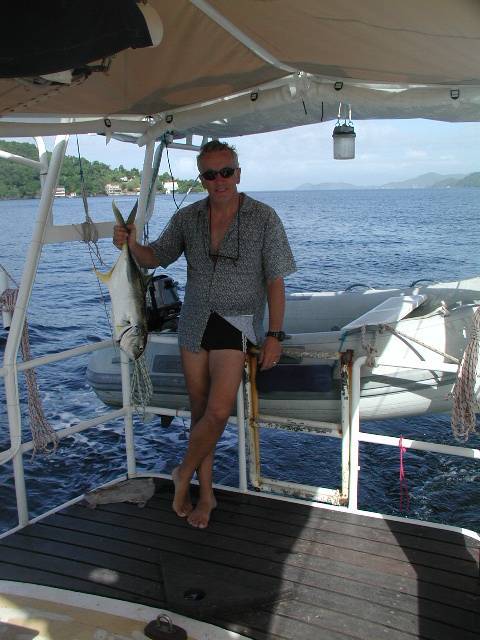 The expert demonstrates what he expects of his reluctant apprentice.

Now I'm sure it's at fishing moments like these when the obsession can begin. Luckily so far, it has only struck one member of our crew. I was enjoying the learning experience but really couldn't find the Captain's level of enthusiasm for fishing every day. Many evenings went by when I found myself sitting on deck, binoculars in hand, wondering if he'd been swept away or was being towed in the dinghy towards Belize by that elusive whopper!

We spent a week at Chacachacare Island, an ex-leper colony, which provides a beautiful and secluded anchorage away from the hustle and bustle of Chaguaramas. The fishing wasn't going so well and the Captain was getting edgy. Several evenings went by when he'd disappear in the dinghy but return empty handed. We were even forced to open cans for dinner!

One particular evening, the captain/fisherman/chef was doing just this when I heard a strange noise on deck. "Sounds a bit like your fishing line whirring", I said absent-mindedly. Dinner was abandoned as he rushed on deck just in time to grab the rod before it disappeared overboard! "I put a bit of bait on the line and left it out", he explained, "I was planning to fish for Snapper later". In the dark we couldn't see what we'd hooked but it certainly put up a good fight! After about ten minutes we finally managed to land the five-pound Mutton Snapper, our biggest catch so far. The fridge was full again. I wondered why we'd been making such efforts to go out fishing, when our biggest catch was caught with no effort at all. "Great", I thought, "finally we can at least have a break from the fishing trips".

Not so, the next day the fishing continued regardless. I protested that we had no space for any more fish. "I'll put them back then", he replied. Now I really began to feel that I was missing the point, after all if we want to play with fish, we have our pet Grenadan Guppies on board, who live in a spaghetti container.

So, maybe I haven't been overcome with the passion for fishing, but I have learnt that with a small investment in the right type of equipment and a little determination, even a reluctant novice like me can supplement their diet with some fresh fish during those times when the only cruising we're doing is in the dinghy, to happy hour!

Free dinner - Wahoo for the next fortnight!